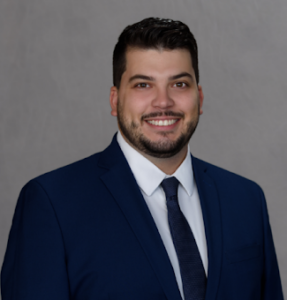 Nick is a litigation associate at Perry & Neblett. He attended Florida International University, where he served on the executive board of Phi Alpha Delta, Law Fraternity International and was the founding member/captain of the FIU Cycling Team. Upon completing his studies and obtaining a bachelor’s degree in criminal justice, he attended Florida International University School of Law, where he was a student in the school’s evening division and worked full-time at a law firm specializing in first-party insurance litigation. During his studies, he traveled to Sevilla, Spain and studied at the Universidad de Sevilla: Facultad de Derechos and studied comparative judicial systems and comparative succession law. Upon returning, he became the research assistant for a dean of the law school. He also volunteered at the school’s Community Lawyering Clinic, assisting in cases involving dissolution of marriage and guardianship.

Upon his admission to the Florida Bar, Nick practiced at firms specializing in insurance and general liability defense, defending his clients in areas of homeowners insurance, construction defect, personal injury, trucking and transportation, and cases involving ride-sharing applications. He also managed the Florida office of a national defense firm.

Outside of the office, Nick is an avid outdoorsman, spending his time cycling, boating, and barbequing.